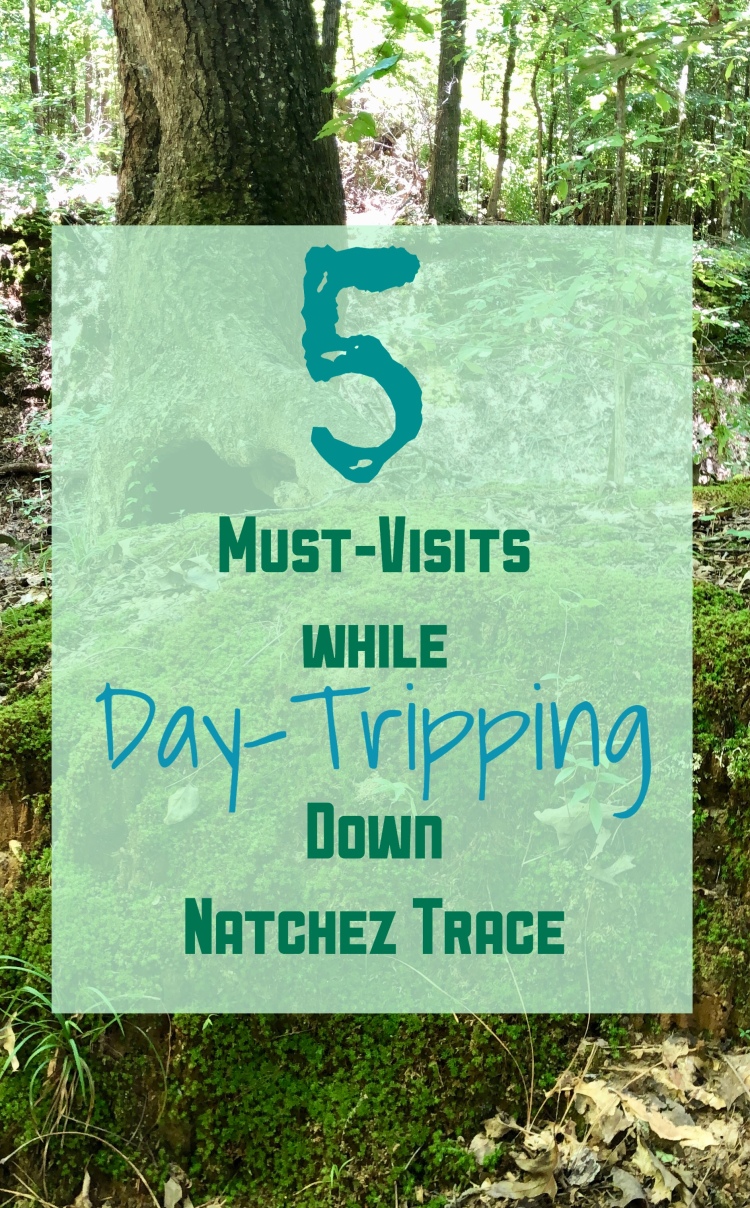 What’s great about wandering is you can truly plan your trips on a whim. Where should we go? Which route should we take? Should we stop along the way? How long should we stay? Spontaneity gives us the ability to choose our own adventure. And so we did!

Last Saturday, I woke to the bright summer rays shining through my window and quickly decided, it was too beautiful of a day to waste. Why not explore somewhere new? So I packed my day bag consisting of a swimsuit (because you never know), blanket, shorts, bottled water and some snack bars, loaded up my favorite furry co-pilot, Sally Boo, and we set sail for the Trace! 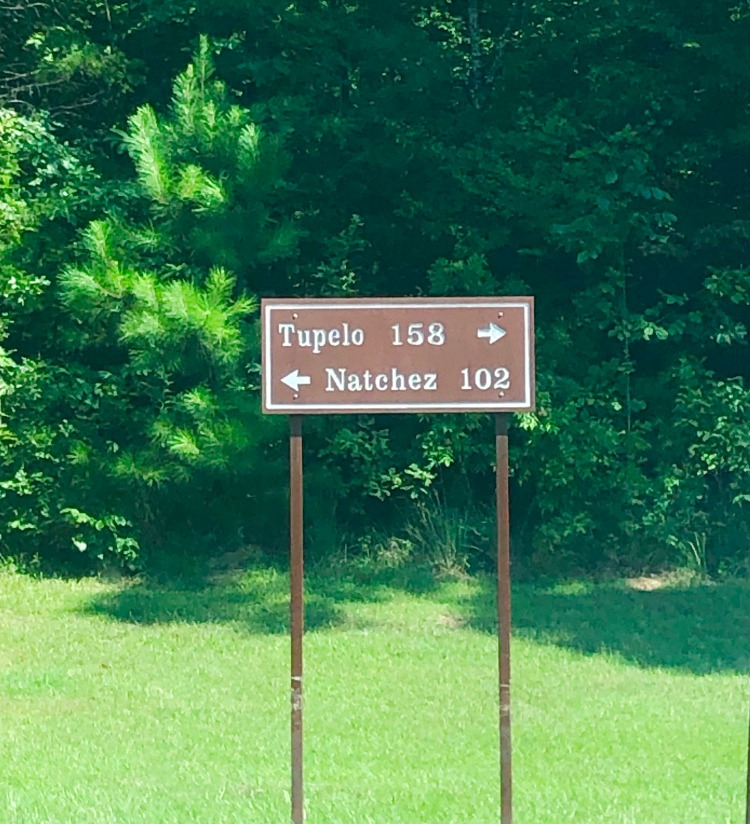 Spanning 444 miles from Nashville, Tennessee down to Natchez, Mississippi is a beautifully maintained scenic highway known as Natchez Trace Parkway. Since I live in Jackson, I frequently commute on the trace, but…. I’ve never headed Southbound before now. 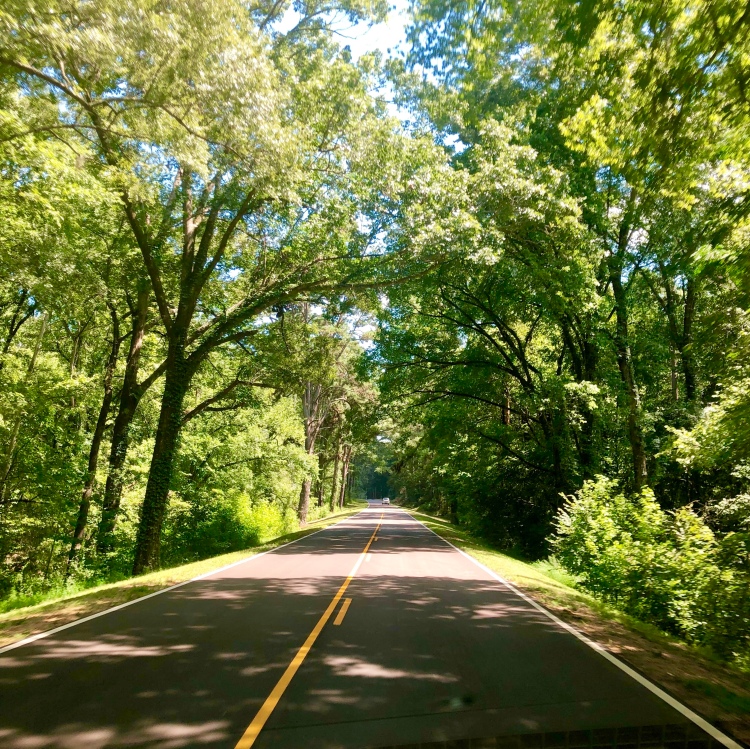 Natchez Trace is a travel experience all its own. Saturated with historic landmarks, campgrounds, parks, picnic areas, and many other sights, it’s easy to spend weeks exploring and never leave the trace. On this particular adventure, we (Sally & myself) set our tentative destination for Natchez, MS, the origin of the trace and only 100 miles from Jackson. We were off!

Our first stop was Owens Creek Waterfall. Decades have reshaped this quaint little brook that the community of Rocky Springs used to spend their hot southern summer. Now, it’s disguised by a small turnabout along the Trace, just south of the Rocky Springs exit. You wouldn’t know it was even there unless you were looking. I pulled into the half moon drive to scope out the creek. It was perfectly serene! A quiet cool spring in the middle of the forest. I was surprised the stream was clear, unlike most of Mississippi’s muddy water. Immediately I knew we found our first destination. After exploring the waterfall, capturing some landscape pics, and a short yoga practice, we continued on down the Trace. 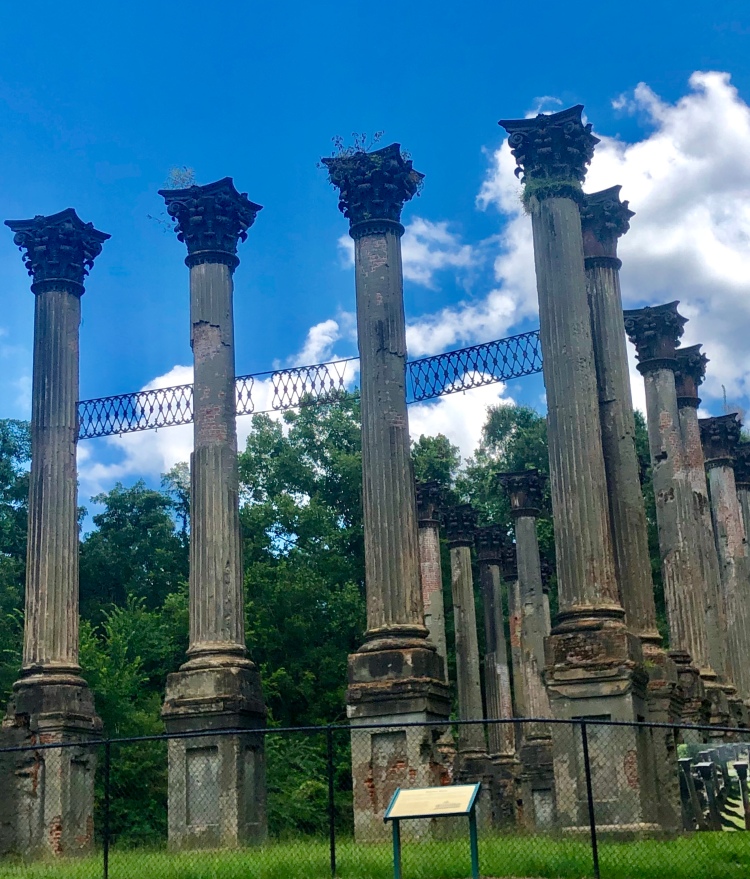 Every time I hear the word “ruins” I immediately think of ancient Mayan burial grounds and ghost stories. Well the Windsor Ruins aren’t quite that creepy, but theres still something about them that takes you back through history.

These 45-ft-tall masonry columns are all that’s left of the Windsor Plantation home built in 1861. What was once one of the largest private residences in Mississippi before the civil war, is now ghosted by these 29 century-weathered pieces of supreme architecture.

If your traveling on the Trace, the ruins are only a 10 mile detour, but definitely worth the visit and a few pictures. If you are a motorcyclist like me, this is a beautiful ride and exhilarating bike ride from Jackson. 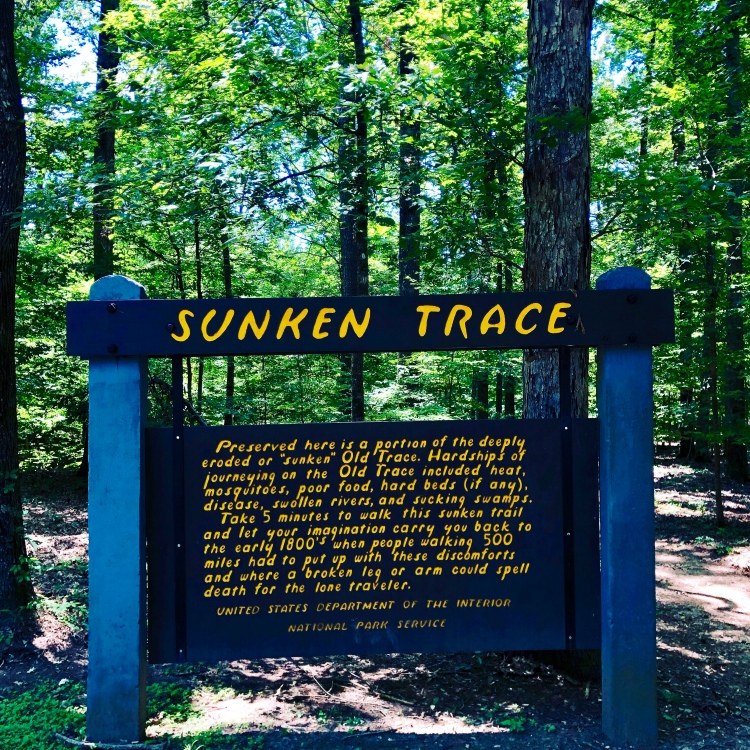 The sunken Trace was an impulsive stop, but was also one of those nostalgic landmarks that change the way your appreciation for the parkway today. Here, we followed the short path to a bend, where we found what looked to be a dried up ditch bank. What I didn’t expect is that this ditch bank once paved the way for thousands of travelers in the 1800’s. As they ventured 500 miles, through swamps, forrest and rivers, they undoubtedly suffered the heat, humidity, mosquitoes, and disease along they’re journeys.

The ditch has become eroded over the centuries and is now a depression of the earth. Hence the name “Sunken Trace.” While traveling north of Natchez, pause here to walk along side the old paths and take a minute to appreciate the stories this ground would most certainly tell.

We Made It: Natchez, MS

Natchez caught me entirely by surprise with its prestige beauty, Once I reached the end of the beautiful trace, I headed for the River. Since we had to drive through downtown, to reach Bluff Park. This is the center of the historical French Fort Site the French settlers built in 1716. During the Civil War, so much of Natchez’s structure and development was spared from damage and preserved since the city did not hold a strategic position. Today, Natchez is peppered with a blend of French, English and Spanish architecture. You can tour plantation mansion, antebellum homes and even stay at some that have been transformed into bed and breakfasts.

Walking through Bluff park, I admired the tall walls that protected the fort centuries ago. Today there are several running and walking trails both above and below the park. Since it was a hot day we did not go down to the bottom of the Bluffs but they will definitely be an Natchez Adventure! 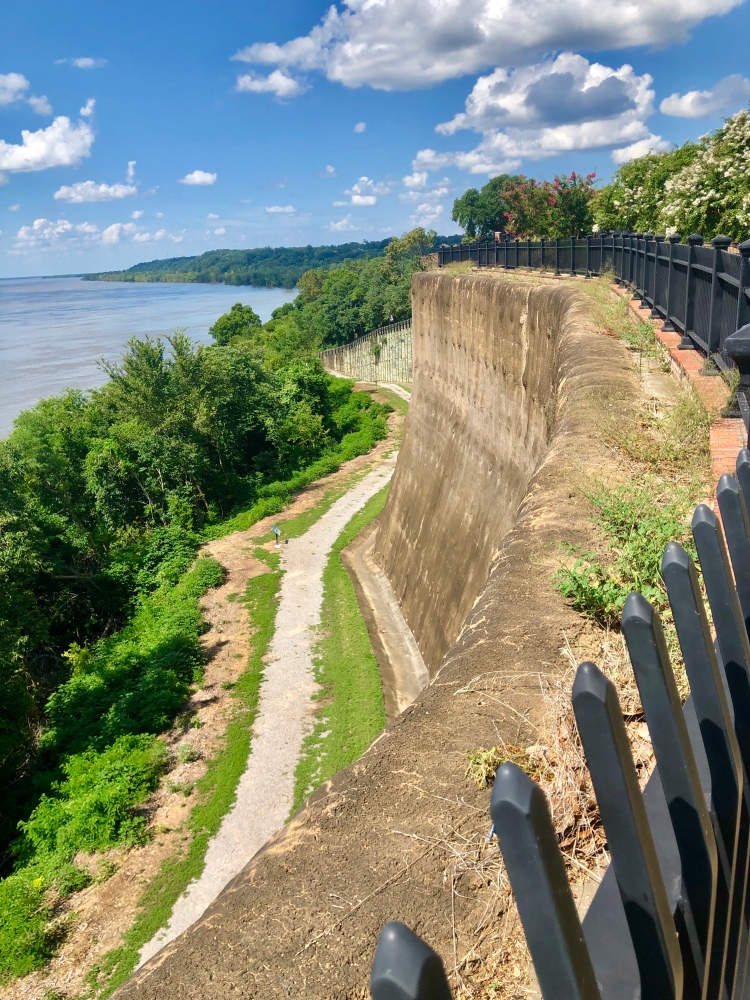 As we walked through Bluff park, we crossed a pretty little bridge that offers passage over Roth’s Hill Road. On the bridge I noticed several pad locks on the cables of the. This is the Bridge of Sighs, named after the famous Bridge of Sighs of Venice, Italy. The bridge historically got its name from the sighs of despair heard as convicts got a final glance at Venice on their way to prison.

Many French and Italian bridges are glittered with pad locks as a symbol of a couples unbreakable love for each other. Since Natchez has such strong French and Spanish influence, it only makes sense for locals to express their love by repeating the tradition. Now, couples come from all over to write their names on the locks, attach them to the bridge and throw the key away in the river to pledge their affection for each other.

After a long fruitful journey down the Trace to Natchez, it was time to go home. However I came to the conclusion that one afternoon in this town wasn’t enough. In that spirit, Natchez 2.0 weekend trip is in planning. Stay tuned….